The world of motorsport has certainly come a long way over the past hundred years or so.

You might not know this, but the first ever series production bike was the Hildebrand and Wolfmüller which could achieve a top speed of 28mph. Whilst this might not sound a great deal, given the feats of modern day machinery, the Hildebrand could actually reach this speed working on only a simple steam-powered engine.

Since then, technology has evolved dramatically.

There are now bikes that cater to a wide range of interests, whether you’re into touring, cross-terrain, or road biking, and we now have machines that can test the limits, travelling up to 370mph and even jumping great heights.

With this in mind, here at Blue Box Batteries we have put together a collection of the top 5 motorcycle records past and present.

Perhaps the most sought after and high-octane record in motorcycle history, with 35 previous record holders since 1903.

So many records have been dominated before at the popular Bonneville Salt Flats, USA.

After two previous successful records of his own in 2006 and 2008, the American Rocky Robinson set an undisputed precedent in the history of land-speed on the 25th September 2010.

The accomplishment was confirmed and certified by the Federation Internationale de Motorcyclisme, the leading authority for motor racing and in 2012 the Ack Attack’s triumph featured in the Guinness Book of Records.

Check out Rocky Robinson’s amazing run in the clip below.

The Longest Journey In A Single Country

Widely known as the Iron Butt challenge, the longest journey by motorcycle in a single country is currently held by American Buck Perley and British born Amy Mathieson riding as pillion.

Travelling on a Chinese made CFMOTO CF650-TR the pair’s dedicated trip took 146 days, from the 19th July to 11th December 2013 and saw them pass through every single one of China’s provinces along the way on an epic ride spanning 20,727 miles (33.157 kilometres).

A little different to your ground-breaking speed and jumps, the largest rideable motorcycle to ever be recorded was acknowledged just last year and is expected to feature in the Guinness Book of Records in 2014.

What’s more, the bike is powered with a 5.7 litre V8 engine that runs at an impressive 280HP.

To see Fabio’s bike in action, take a look at the video below.

If you’re fanatic about stunts then you’ll most certainly love this! 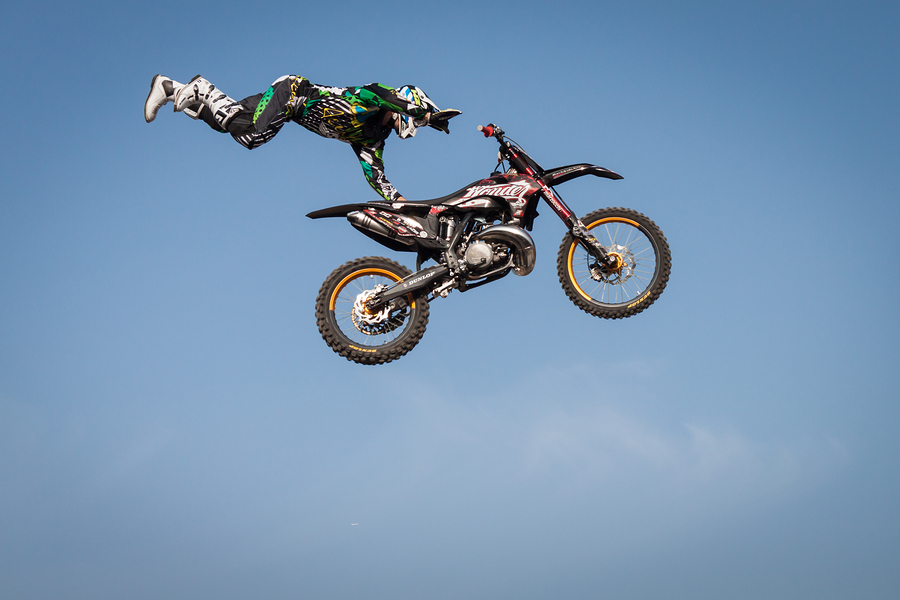 At the MotoRAI event, Amsterdam 2004 rider AC Farias, who actually hails from the Netherlands, pulled an unbelievable 89 metre (292ft) wheelie without using his hands, consequently breaking the existing world record.

In what has to be, the most successful death defying leap in motorbiking history, at just 27, motor cross stunt rider Robbie Maddison set a new world record and conquered the impossible.

As part of the Red Bull ‘New Year No Limits’ broadcast in Las Vegas, New Year’s Eve 2008, Robbie hurled himself off of a 10 metre ramp to land on the top of a 30 metre (96ft) replica of the Arc Di Triomph.

But that wasn’t it, once he had safely landed, Robbie then proceeded to make his way back down. He jumped off of the top of the monument, free-falling 25 metres (85ft) to land safe and sound on the ramp below, the impact of which opened a nasty cut on in his hand.

However, soon after Maddison’s amazing jump, a new contender Ronnie Renner went on to set a new record for the highest motorcycle jump from a quarterpipe. Well, that’s it for our collection of some of the best motorbiking world records to date. If you have any you would like to share, feel free to head over to the Blue Box Batteries Facebook page and let us know.