History Of The VRLA Battery.

The history of the VRLA battery goes back to the early 1930’s. However, the term VRLA was not introduced until the 1980’s. Originally they were known as “sealed” batteries but following a number of serious incidents the more appropriate term of Valve Regulated Lead Acid (VRLA) battery took over.

Today we have two distinct types of VRLA batteries; those with gelled electrolyte (GEL) and those with absorbent glass mat (AGM) separators, which hold most of the acid.

The first VRLA batteries were in fact 2-volt cells and nothing like the multi-cell monoblocs or large capacity single cells we see today. They were “laboratory” types used for portable radio applications. By mixing fine silica with dilute sulphuric acid a thixotropic gel electrolyte was produced. Over time this partially dries out producing fisher cracks that allows oxygen to pass to the negative plates and gas recombination to take place. These original types had poor gas recombination efficiency and were designed to be spill resistant. They were not regarded as gas recombination products. There is evidence that the earliest “mat” batteries appeared about the same time and used separators made from felt, which held the acid. These were “sealed” with simple plugs when discharged and the plugs were removed when charging. Again, these were regarded as non-spill rather than recombination types. They were used for aircraft application when conventional “wet” batteries were not acceptable in aerobatic activities.

It can be reasonably argued that Otto Jache who was working for the German battery manufacturer Sonnenschein developed the modern GEL battery in 1957. 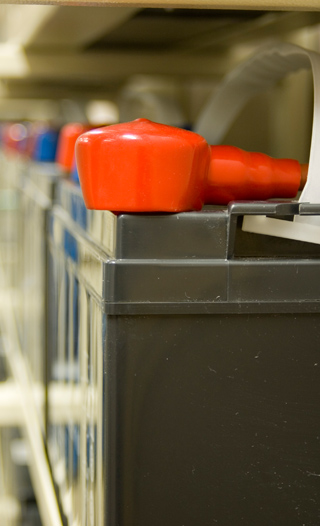 The GEL product was considered to be better for cycling applications and more vibration tolerant than the wet product equivalent. Later, Otto Jache and Heinz Schroeder developed the design for high capacity cells and multi cell monoblocs. GEL cells and monoblocs use a conventional separator similar to those used in “wet” cells. These early products had a simple valve to prevent leaks.

As the GEL product became more popular and as cell technology developed it was realized that the water usage was very low and cells did not dry out very quickly. With a one-way valve set at about 2psi good gas recombination was achieved. This was in the very early days when gas recombination was not fully understood. It was discovered that at the end of the charge cycle when oxygen is being produced at the positive electrode, it is capable of passing through the gel, which had develop fisher cracks as it dried out slightly. Oxygen is rapidly attracted to the negative electrode, which is highly charged spongy lead. Upon contact with the negative electrode, oxygen changes the spongy lead to lead-oxide, and being in contact with the electrolyte water is produced.

Today, GEL cells are available in small capacity monoblocs of only a few Ah up to large capacity single cells of over 4000Ah. The largest cells may be mounted vertically or horizontally. There resistance to vibration makes then inherently good where a seismic resistant product is preferred.

The early “mat” batteries were few and none were regarded as very good. Investigations moved towards a sealed nickel-cadmium product but the real objective was to produce a “maintenance free” lead-acid battery at a lower cost. It was not until the early 1960’s that real studies into a viable maintenance free mat separator battery took place.

It was well understood that oxygen would recombine with the negative electrode in nickel-cadmium cells and also in the gelled electrolyte products. However, the problem was to develop a separator that would allow sufficient acid to be present within the cell and would also allow gas to pass through it to the negative electrode where gas recombination would occur.

In 1967, John Devitt and Donald McClelland began researching small cylindrical lead-acid cells with spirally wound electrodes. At that time, they were working for Gates Energy Products, a USA company, who were the largest manufacturer of rubber belts and hoses in the world and wanted to go into the battery business. By the end of the year they showed the first “Gates D Cell” to the Gates board of directors. In 1971, the newly formed company Gates Energy Products was offering the D cell and the X cell recombination products to the world market.

These cells were the first to use a microfiber glass separator and the term we know today as “absorbent glass mat” (AGM) was born.

The secret was in the separator, which held sufficient electrolyte for the electro-chemical reactions to work but would also give sufficient “open area” for the transportation of oxygen to the negative electrode.

Development of the product continued with a change to a more corrosion resistant grid alloy, higher plate to separator compression ratios and a better understanding of the internal gas pressure on recombination efficiency.

One of the most interesting demonstrations of the characteristics of the early “D” cell was to connect a paper clip between the positive and negative terminals. The short circuit current would quickly result in the paper clip glowing red-hot before melting. The current flowing during short circuit was over an order of magnitude greater than that from an alkaline product and this was already substantially higher than the best high discharge current available from the GEL or “wet” product. This high current superiority is one of the advantages of the AGM when compared with the GEL product.

The product was known then, as it is now, as the Cyclon battery.

Development continued and manufacturing spread. A relatively small Company called Varley Batteries in the UK was manufacturing aircraft batteries and Gates wanted part of the business. Varley adopted the Cyclon technology and offered a prismatic version of the AGM product to several aircraft manufacturers. Notably BAe 125 and 146 business jets used the product along with the Harrier the AV8B and some F16 variants as alternatives to the NiCd batteries previously used.

To increase high performance and durability, rolled-punched grid technology is often used in the production of VRLA AGM product. Plates can be less than 1mm thick with correspondingly thin separators. The high rate currents from the batteries made today surpass that available from any other type of lead acid battery of comparable volume or capacity. The vibration resistance is also superior to conventional “wet” batteries and similar to the GEL battery.

Development of both GEL and AGM batteries continues. The specific gravity has been increased in mat batteries to enhance the voltage profile and offer better long rate capacity whilst additions of carbon to the plate structure of GEL batteries means that the high current discharge characteristics are substantially better than only a few years ago.

Undoubtedly, development of the VRLA battery will continue because lead-acid batteries are more cost effective when compared to any other electrical storage system for industrial applications.

Today there are many battery manufacturers around the world producing GEL and AGM products. Some are low cost types built down to a price whilst others are state of the art built to exacting international standards.