Final shipping date for online orders will be 17th December 2021, recommencing on the 4th January 2022

Batteries in standby applications require a charging voltage that is sufficiently high to recharge following a discharge, and maintain a fully charged condition without overcharging the battery. This voltage needs to be regulated for different operating temperatures but for simplicity, this document considers operating at 20oC. The principals and overall characteristics shown in this document can be considered to apply for operating temperatures of between 0oC.and 40oC.

The applied voltage to the battery terminals will cause a current to flow and this will result in different voltages being seen across individual cells or monoblocs. It follows that there is much more to be discussed about the float voltage apart from what is applied to the battery terminals. If all standby batteries were of a nominal 2V, i.e. all cells connected in parallel, the subject and characteristics would be simple. However, we live in the real world where 2V cells are more often than not, connected in series resulting in battery voltages from typically 24V or 48V telecommunication systems up to 1000V UPS applications.

When operating at 20oC VRLA AGM product will generally require a float voltage in the order of 2.27Vpc to 2.29Vpc whereas GEL product is normally float charged at between 2.23Vpc and 2.25Vpc. This is primarily due to the different specific gravities of the electrolyte. Although the values differ, the overall reaction to the applied voltage is similar for both types. Where cells are connected in series to form a battery (as described above) the applied voltage will be the required voltage per cell times the number of cells in the battery (Vpc x n). The voltage applied to the battery terminals will cause current to flow through all the cells or monoblocs. Under steady state fully charged conditions, this current is very low and the sum of the voltages across each cell (or monobloc) in the battery string will be the total battery voltage as applied by the charger. Although the current flowing as a result of the applied voltage will be identical in all cells, because of manufacturing variations the voltage across each cell or monobloc will be different. The difference is marginal when the battery is in a fully charged stabilized condition but it is still noticeable and can lead to misunderstanding of the battery condition. It has been shown that a “snap shot” of individual voltages cannot be relied upon to measure the state of charge. There is probably only one exception and this would be when the individual voltage is very low and less than about 2.10V when in the normal fully charged float mode. 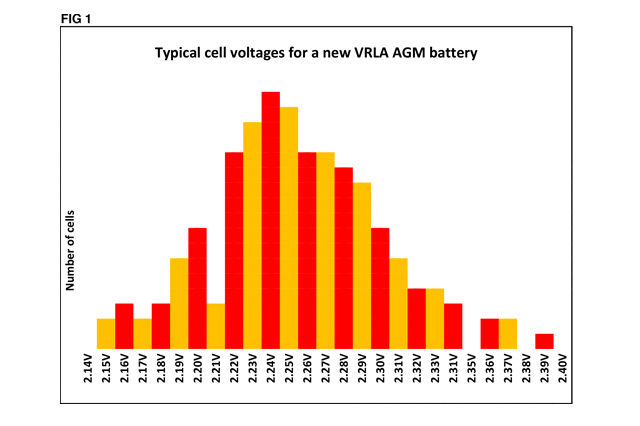 Having established a stabilized fully charged condition, voltage measurements may be used to identify suspect low cells. As an example, if the majority of the cells have a voltage within 2.21V and 2.34V and only a small number have a voltage outside this range, additional monitoring should be carried out to establish if these lower cells recover or continue to have a declining float voltage. Where cell voltages are within this range, no special action needs to be carried out other than regular monitoring and recording of the float voltages as recommended by the battery manufacture. For monoblocs a voltage equivalent to the number of cells multiplied by 2.21V and 2.34V respectively may be used providing very close monitoring is carried out. It is more difficult to identify low capacity cells within a multi cell monobloc. Comparison of float voltages over a period of time will show if the bloc has a low capacity cell. It follows that records should be kept and compared as time goes on.

It has been shown on many occasions that after a discharge, even of an extremely low magnitude, the voltage stability will be disrupted and float voltages will have an increased spread. These will stabilize but it may take several weeks depending on the depth of discharge. See Fig 2 below which illustrates the variation that can be expected and how these variations narrow over time. The values in Fig 2 represent the highest and lowest values of individual cells within the same battery. 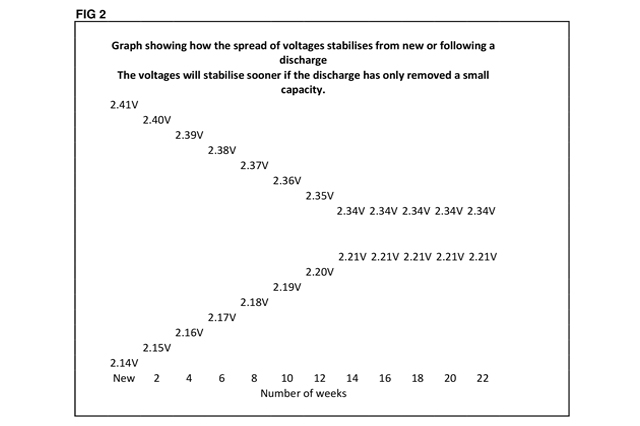 We know that the normal charge voltage at 20oC for AGM will typically be between 2.27Vpc and 2.29Vpc and for GEL product between 2.23Vpc and 2.25Vpc we may want to charge at a higher voltage levels to reduce the recharge time. For AGM product a voltage of 2.40Vpc is quoted by many manufacturers and 2.45Vpc for GEL product. Before using these elevated voltages it must be understood and considered that the higher charging current will create more heat and gas and additional ventilation may be required. The benefits of using these higher voltages are not just a shortening of the recharge time. Using the higher voltages as above will result in the fully charged current being about 10 times higher than using the normal float voltage. This has a beneficial effect in both commission charging and recharging following a discharge because it helps to convert the discharged active materials both faster and more efficiently. The higher voltages also result in better stabilized voltages and the spread of voltages is not as high when the battery is returned to the normal float voltage. It is important to provide adequate ventilation when using these higher voltages and the battery must be returned to the normal float voltage upon completion of the charge; failure to do so may dramatically reduce the battery life. Many engineers recommend an annual charge at a higher than normal float level to help stabilize the cells. The effect on total battery life is small. A 24 hour charge at 2.40Vpc, may, in theory, reduce the life by about 1 week. For good quality AGM and GEL batteries having an expected float life of over 10 years, a loss of 1 week is small.

It is not sufficient to look at the voltage alone when considering float or recharging VRLA batteries. We should also consider the current capabilities and characteristics of the charging source. Most manufacturers recommend that the current available to the battery shall be a minimum of 5% of the 10 hour ampere hour of the battery i.e. 5% C10A. Some manufacturers recommend 10% whilst other may recommend 3%. Without sufficient current the battery may never recharge but may stay in state of equilibrium. A failure will occur upon the next discharge. There have been situations where large capacity batteries have been charged by inadequate solar panels and within one year the battery has been destroyed. In one example, a 5000Ah battery had a 50A (1%) solar panel. After the failure, the system was redesigned using a smaller capacity battery with a controlled charging regime capable of raising the voltage to typically 2.40Vpc and returning the battery to float charge after a pre-programmed time period with a current capability of 10%C10A as a minimum. As an added precaution, a diesel powered generator and separate charger was installed to annually fully recharge and re-commission the system using an elevated voltage. Several years later and the total battery system continue to operate successfully.

Whilst voltage ripple can have a serious effect on battery life, modern charging equipment can easily meet battery manufacturer’s requirements and is not discussed in this document.