A frequently asked question is, should I use a GEL or AGM battery?

To answer this question we need to understand the differences between VRLA GEL and VRLA AGM and we must understand what a VRLA battery is. Simply, a VRLA battery is one which would not normally be topped up with water at periodic intervals which is what has to be carried out on a “vented” battery. Because of this characteristic they have often been miss-quoted as sealed. They are not sealed but have a one way valve to release excessive internal pressure. The design of the valve varies but they all have a pre-set value and when this is reached releases and maintains the pressure within design limits. This pressure is usually low and in the order of 0.5 BAR. Both AGM and GEL are VRLA batteries and have this valve arrangement.

VRLA batteries, both AGM and GEL, are often referred to as Gas Recombination Batteries because they do not need topping up and a large percentage of the gas generated on overcharge is recombined into water and in this respect they are maintenance. However, it must be remembered that when being overcharged both types will give off explosive hydrogen and oxygen and they must never be installed in sealed enclosures or where ventilation is restricted.

Looking at the different characteristics between AGM and GEL batteries shows that they both have some advantages over the other and the choice is not easy. Looking at the designs, in an AGM battery the electrolyte is held in an absorbent glass mat which also acts as a separator between the positive and negative plates. In a GEL battery the electrolyte is “immobilised” in a GEL and a separate separator similar to that used in “vented” batteries has to be fitted. Both types may be considered as “spill proof” but the manufacturer should be consulted if they are to be operated in anything other than a conventional orientation.

Most AGM batteries use high quality very absorbent glass matt separators which in many respects look feels and have the same “mopping up” characteristics as blotting paper. However, it is very different in characteristics when used in a battery. In a GEL battery the electrolyte is “immobilised” by mixing the filling acid with fine silica which creates a gel. In the first instance this looks like thick milk or “runny” cream. It is thixotropic and has to be continually stirred to stay as a liquid, once inside the battery it “sets” into a “wet” GEL format. 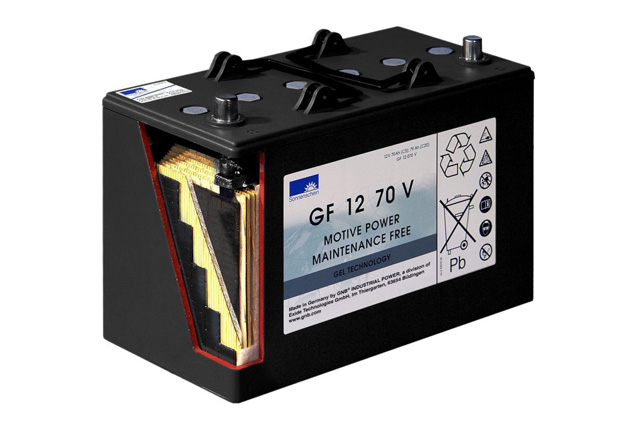 In an AGM battery, typically 10% of the electrolyte is in the plates and 90% in the separators. The GEL battery has a greater volume in the plates because they are usually thicker and also have a larger volume of electrolyte in the gel. Consequently, the GEL battery can have twice the volume of electrolyte than the AGM type. This higher quantity of electrolyte in the GEL battery can help the characteristics in many ways but also has drawbacks. The electrolyte specific gravity (s.g.) in the AGM battery is generally higher at typically 1.310s.g. at 20ºC compared with 1.250s.g. for GEL. The higher s.g. results in a higher initial on load voltage for the AGM battery. Because the GEL battery has a greater electrolyte volume it has a better voltage profile towards the end of the discharge and it does not drop sharply as with the AGM battery. The AGM battery has often been describes as “acid limited”. Again we have to put this in context because the fall off in voltage as the result of acid depletion is only relevant for long duration discharges and is rarely noticed for discharges shorter than 1 hour.   The construction of AGM batteries with its thinner plates and no requirement for a conventional type of separator means that a much more compact design can be achieved. The space between the plates (plate pitch) is much smaller in AGM batteries which reduce the internal impedance resulting in a higher on load voltage for the same current drawn. Overall, this improves the power to volume and weight ratio and gives considerably better high current characteristics. AGM batteries are usually smaller in volume for the same ampere-hour performance.

GEL batteries are generally more tolerant to the influences of the surrounding ambient temperature. Experiments have shown that the recombination reaction generates internal heat and this is more easily dissipated into the surrounding air with GEL batteries. It is argued that this is because of the greater volume of electrolyte in the GEL battery and because this is in contact with 5 sides of the “cube” design they have a better heat dissipation. For the AGM battery, frequently none of the electrolyte is in contact with any of the sides which then forms a “double glazing” effect and retains the heat. Excessive heat within batteries can cause thermal runaway and although this is not a problem with either type when installed correctly, in very high ambient conditions, typically over 40ºC, the GEL battery is better at coping with this abuse condition. Some GEL batteries have tubular positive plates which makes them better for cycling applications. The AGM design will not work with tubular plates, therefore thicker more durable flat plate are used by some manufacturers which come some way to matching the tubular plate GEL battery characteristics. Tubular plate or thick flat plate GEL designs do not have the high rate performance of the thinner plate AGM battery. Plates having a thickness of less than 1mm are now available from some AGM battery manufacturers and with modern lead alloys for the plates, corrosion is low and the life is long for float charge standby applications. In some designs it has been shown that the life of thin plate AGM batteries is as good as or even better than tubular plate or thick flat plate designs in standby applications. It has often been stated that VRLA batteries, both GEL and AGM, do not cycle well. This is not true. It has been shown that VRLA AGM batteries of thin plate designs can easily achieve over 750 deep cycles when operated with the correct charging equipment. Some GEL batteries have achieved twice this for true cycling applications with sophisticated chargers which reduce overcharge to a minimum.

In the world of float charge standby batteries, the charging source is usually a constant voltage type. This will give a constant voltage at the charger design maximum current up to a preset voltage which is usually in the order of 2.23Vpc to 2.28Vpc, depending on the VRLA battery design. These chargers are very efficient in providing power to the battery following a discharge but will inevitably result in taking several days before the battery is truly fully charged. A “nominal” 100% recharge can usually be achieved within 72h even following a 100% depth of discharge. All too often, cycling applications require the battery to be recharged in a short time such as 8 or 12 hours and this is insufficient time when using a standby system battery charger. For this type of industrial application it is essential to oversize the battery by at least 20% and to have a higher recharge voltage available. It is also desirable to have a higher recharge current. Typically after adding 20% to the required capacity to carry out the discharge, a voltage of typically 2.35Vpc and a current of 10% C10 amperes is desirable. Some charger designs have multiple voltage steps and consider battery temperature to achieve the shortest recharge time with minimal overcharge. 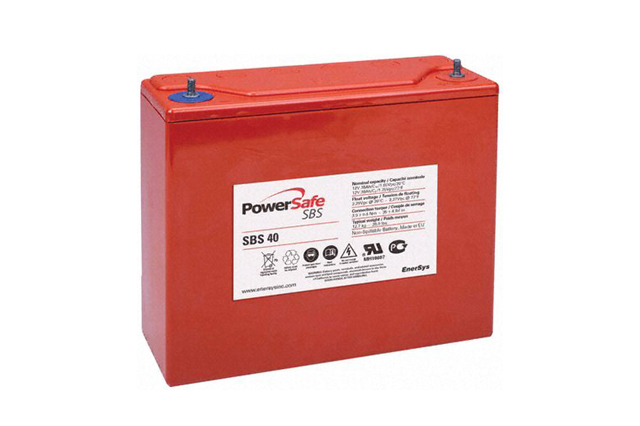 'Off grid' applications using solar and / or wing generators often have a generator back up to cater for the inevitable shortcoming of the “renewable” charging source. The GEL battery is generally the better choice for this application. The user should always seek professional advice from the battery manufacturer. If the design is flawed, the battery will fail prematurely.

For mobility scooter and golf cart applications the first choice is usually a GEL battery because it offers a better whole life cost. Battery failure due to abuse is frequently seen for these applications. The battery is often left it in a discharged condition for many days or even weeks. The GEL battery is much more tolerant to this abuse but it is not immune. Users should be aware of this because there is no point in buying a higher cost GEL battery and then destroying it by abusing it. For this application, the scooter or golf cart will have its own charger and it is essential to use this if a satisfactory life is to be expected. Interestingly, lithium batteries are now finding their way into this application but the cost is high. When we understand the characteristics of AGM and GEL, we are in a better position to make our choice for the application. However, we often find that the initial cost is a major factor and this will make the choice simple. If initial cost is not a deciding factor then whole life costs may make the choice easier. The lowest initial cost very often turns out to be the highest cost over even a 5 years life. Space considerations will also influence the type purchased and principally, the AGM battery will be a better choice where this is important. Where high power outputs are required from the battery such as 15 minute UPS applications, the AGM battery is the first choice. They offer very good power to volume and power to weigh ratios and they offer a lower cost both initially and as a total life cost. There are very few UPS applications having a required run time of less than 1 hour where the GEL battery has been chosen.

For telecommunication applications, the choice is much harder to make. Small batteries are generally AGM but in high ambient conditions the GEL battery has advantages. The temperature in street side cabinet can be alarmingly high in the summer months and the GEL battery is generally better suited to this application. Where batteries are in buildings with good temperature control, the AGM is usually installed. There are large ampere-hour batteries in both GEL and AGM design and the costs are often very similar. The discharge voltage profile can favour the AGM battery in some cases but the more stable profile of the GEL battery can also be of benefit. Each application should be considered on its own requirements to ensure the correct choice is made.

Many factors will influence the choice between GEL and AGM and sometimes no rational logic is used in the decision.